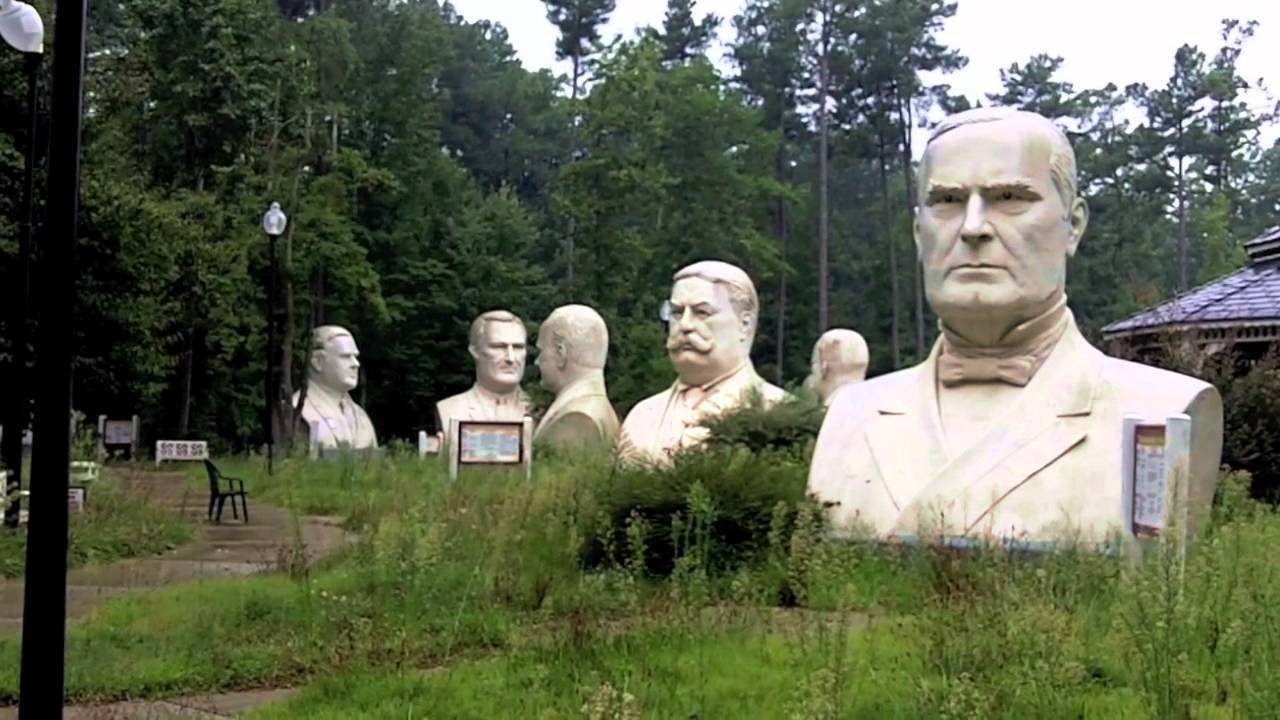 So you think this is a strange title to a blog? Well, it is, but truth is stranger than fiction so they say. I have seen the heads both at the park and in their current home.  When the heads were at the President’s Park in Williamsburg, Virginia in York County off of Rt 199 and now that they are Abandoned in Croacker, Virginia which is near Williamsburg in James City County.

Several reporters has written about this legacy below Sara Rose Martin of the Virginia Gazette just wrote about them.

Missing noses and cracked heads, the deteriorating 16- to 20-feet tall stone presidential busts that sit on private property off Croaker Road welcome at least 100 curious visitors each month. The tours on Presidents Day weekend were certainly no exception.

The 43 statues once stood proud at Presidents Park in York County, but when it went bankrupt in 2010 they were left abandoned for a couple of years. Commissioned to destroy them, Howard Hankins gave them a new life at Hampton Roads Materials 12 miles down the road.

“Fortunately he is a blue-blood Virginian, a history nut and of the means to spend $50,000 out of his own money to take a crew of six over the course of three weeks one-by-one to his property here as a temporary home,” said John Plashal, the president’s heads tour guide. “This was eight years ago.”

“He also happens to be the gentleman that saved all 42 of these precious artifacts,” Plashal explained. When it closed, Hankins was told to remove the statues and put them in a stone crusher.

“He didn’t have the heart to do so,” Plashal said.

From 2004-2010, the statues were part of a tourist attraction in Williamsburg, Virginia, called Presidents Park, but the park wasn’t a hit among visitors .

“It was overpriced. It wasn’t really in an ideal location. It wasn’t marketed very well,” he said. “And it was kind of sterile from what I’ve heard from people who have been there.”  This is very true as I saw them at the original park

The statues at their current home were open to the public for some time but became a liability, which led Hankins to cut off access to the busts completely. But as they gained more notoriety online, the mystique of the abandoned structures only made people more interested and trespassers more prevalent.

A photographer and storyteller of abandoned places in Virginia, Plashal worked with Hankins to organize public access to the statues that ultimately alleviated the problem of unwelcome night guests. He now leads about one tour a month in the winter and two in the warmer months, which often sell-out at 100 people.

To Saturday’s 2/15/20 eager visitors, Plashal described the statues’ origin, one of three sets sculpted by a Texas artist named David Adickes. He shared how the 20,000-pound structures were moved to the property, now standing shoulder-to-shoulder surrounded by mountains of dirt and passing industrial trucks. He led visitors through the presidential heads, sharing some of the most human, and fun, parts of the powerful men’s lives.

George Washington was actually a redhead, he said. He was the only president to never live in the White House and he liked to distill whiskey, which led him to name two of his dogs Drunkard and Tipsy.

Andrew Jackson was a tough guy and a big fan of gun duels, Plashal said. He also had a pet parrot that he taught to say curse words, which became problematic in the White House.

Adickes said Abraham Lincoln was the easiest sculpture to create because of his strong facial features, Plashal said. Lincoln was a prolific letter writer and he would often keep letters in his top hat.

Plashal took questions while couples, families and photographers meandered through the statues or up hills to get the best shots.

After developing an interest in photographing abandoned buildings several years ago, Morgan Marion and Jackson Fuhrman drove six hours from Philadelphia to see the dilapidated sculptures and hear Plashal talk.

Even though they were on display for the public to see for 6 years in President’s Park, they never attracted the kind of popularity they have now.

Plashal said when people turn the corner and see the artifacts for the first time, their jaws drop. The sight is as impressive as it is bizarre.

“We’re going to stay here until they tell us to leave,” Fuhrman said. “It’s a place we talked about since we met each other a few years ago and we finally made it happen.”

When Hankins saved the statues he had dreams of restoring them to their former glory and making another park for them to proudly stand. As of now, the heads have no new home on their horizon, Plashal said. But a lot of people seem to like them just where they are.

“Now that they’re falling down and on private property people from all over the world fly here,” he said. “It’s just this thing that’s spreading like wildfire.”

Three of the president heads – Abraham Lincoln, William Henry Harrison, and Zachary Taylor –were temporarily on display in Glen Maury Park in Buena Vista before being transported to President’s Park in the early 2000s.

During the day tour, Plashal supplements these elements with arbitrary facts about each president. He discovered quickly that property visitors weren’t after the textbook accomplishments of our nation’s leaders, but rather out-the-box stories that would wow their friends at home. Perhaps the most outlandish of tales is the disappearance of the Barack Obama statue. “We had [a 2-foot-tall prototype] of Obama, a miniature White House and all of the original placards [in a shipping container],” says Plashal. “During one of my evening classes, someone actually stole Obama. He ended up returning him, but [Obama] is now under lock and key and we only bring him out four times a year with security guards.”

To marvel at these accounts firsthand, sign up for one of Plashal’s day tours that run all winter long. His last evening photo shoot is scheduled for Saturday, Nov. 23 at 3 p.m. To learn more about Plashal or to purchase tour tickets, visit Facebook.com/JohnPlashalPhoto or JohnPlashalPhoto.com.

previousVirginia Island Which May Soon Be Lost: Tangier Island
nextSpring Has Sprung: What are Folks Doing?