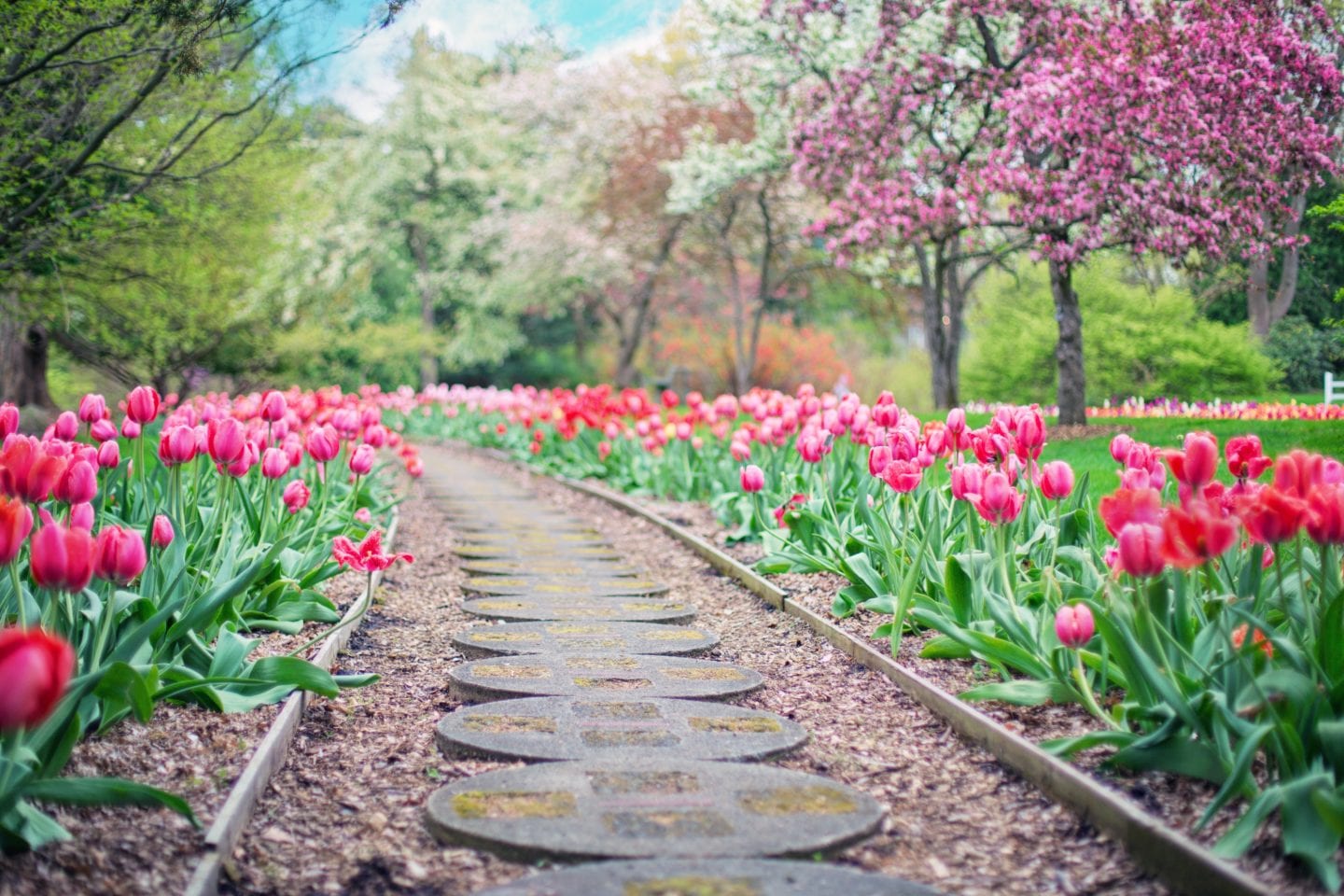 Have you ever said that you or someone you know has Spring Fever?  What do you think about?  Colored Eggs, Chocolate Bunnies, Cherry Trees blooming, Flowers peeking out, the hot days of summer approaching or even the days are longer!  Whatever you think about you are not alone. Our ancestors saw Spring as a time of rebirth, planning and the departure of the long cold winter.  So it is not surprising that a lot of these celebrations from around the world deals with symbols of rebirth: chickens, rabbits, eggs, budding of the plants and light!

Here are a few Spring Celebrations from around the world.

Want to take part in an epic three-day water fight? Well, look no further than the water festival in Thailand that happens every year. Just one part of the spring and New Year celebration, Songkran, the water festival shuts down major roads and packs them with people ready to have some water fun. Grab a bucket and load up!

Nothing says spring like throwing a doll in water. Wait, what? Well, this is a special doll, usually made of straw and dressed in colourful clothes. You’ll see Polish families and friends toting these dolls along as they march down to a pond or river (any body of water will do). This doll represents wintertime, so to send winter on its way and welcome spring, these dolls are sunk in water. Sometimes they’re even set on fire by adults beforehand. They really want to make sure winter stays away for another year!

Since 1878, American presidents and their families have celebrated Easter Monday by hosting an ‘egg roll’ party. Held on the South Lawn, it is one of the oldest annual events in White House history. Some historians note that First Lady Dolley Madison originally suggested the idea of a public egg roll, while others tell stories of informal egg-rolling parties at the White House dating back to President Lincoln’s administration. Beginning in the 1870s, Washingtonians from all social levels celebrated Easter Monday on the west grounds of the U.S. Capitol. Children rolled brilliantly dyed hard-boiled eggs down the terraced lawn.

However, by 1876, a concern for the landscape led Congress to pass legislation to restrict the public use of the Capitol grounds, effectively prohibiting any future egg rolling. The new edict went unchallenged in 1877, as rain cancelled all the day’s activities, but in 1878 President Rutherford B. Hayes decided to open the South Lawn to egg rollers, as it had previously been reserved for the First Family’s private Easter activities. Thus, a new tradition was born. In 1974, the Nixons hosted egg roll races, an event which has become an Easter Monday favorite.

Celebrated across India, it’s an ancient festival with the first mentions of it dating all the way back to a 4th century poem.

It was even described in detail in a 7th century Sanskrit play called “Ratnavali,” written by the Indian emperor Harsha.

“Witness the beauty of the great cupid festival which excites curiosity as the townsfolk are dancing at the touch of brownish water thrown … Everything is colored yellowish red and rendered dusty by the heaps of scented powder blown all over,” wrote Harsha.

The tradition of throwing colored powder and water is believed to originate from the mythological love story of Radha and Krishna.

Krishna, the Hindu god depicted with dark blue skin, is believed to have complained to his mother about Radha’s fair complexion.

To ease her son’s sadness, his mother suggests he Radha’s skin color by smearing her with paint. It’s believed that this is where the custom of smearing loved ones with color during Holi came from.

Nowruz is an ancient spring holiday. It is celebrated on the day of a vernal equinox and is deservedly considered as a beloved holiday in many countries of the Eurasian continent. There is no politics, no religion about this holiday, as in the song of John Lennon “Imagine”, but the faith that happiness comes along with the spring renewal.

In the farming oases since the ancient times Nowruz has been celebrated with a big national fest. They would start the preparations in ahead. Cities and villages get cleaned; they are decorated and get a festive look. There is a good tradition to plant fruit trees and go to the nature. Parks, squares and central streets arrange festive bazaars and fairs, accompanied with singing and dancing performances.

There are also contests of national wits, singers and narrators held on Nowruz. Wrestlers arrange national struggling. You can also see quail-, cock-, or sheep-fighting.

It is to note the horse-racing competitions that attract thousands of viewers, races and single-combat of riders. The most popular and contradictory competition is kupkari (ulak). The sport of strong people and smart horses, the game where riders fight for the sheep or goat carcass, that needs to be snatched, protect from competitors and deliver it to the special earth pot at the finish. Winners get not only honor and respect; they can also get a new car as a prize.

The Cooper’s Hill Cheese-Rolling and Wake is an annual event held on the Spring Bank Holiday at Cooper’s Hill, near Gloucester in England. It was traditionally held by and for the people who live in the local village of Brockworth, Gloucestershire, but now people from all over the world take part. The Guardian newspaper called it a “world-famous event”, with winners coming from the United States, Australia, New Zealand and Nepal.

From the top of the hill, a 7–9 pounds (3–4 kilograms) round of Double Gloucester cheese is sent rolling down the hill, and competitors then start racing down the hill after it.[3] The first person over the finish line at the bottom of the hill wins the cheese. The competitors are aiming to catch the cheese; however, it has around a one-second head start and can reach speeds up to 70 miles per hour (110 kilometres per hour),[3] enough to knock over and injure a spectator. In the 2013 competition, a foam replica replaced the cheese for reasons of safety.[2] The winner was given the prize of an actual cheese after the competition.

The Cheese Rollers pub in the nearby village of Shurdington, about 3 miles (5 kilometres) from Cooper’s Hill, takes its name from the event. The nearest pubs to the event are The Cross Hands and The Victoria, both of which are in Brockworth, which competitors frequent for some pre-event Dutch courage or discussion of tactics and after the event for convalescence.

Cimburijada, also known as the Festival of Scrambled Eggs, takes place each spring in Zenica, Bosnia. This festival has been celebrated for hundreds of years, and marks the changing of the seasons. Each year, thousands of locals and tourists gather on the streets at dawn to celebrate the first day of spring. The egg, which symbolizes the birth of new life, is the main food of this festival, and is cooked in huge quantities in giant pans. The whole city takes part in a barbecue and party for the rest of the day, with the brave ones plunging into the River Bosnia, signaling the start of the swimming season.

Hundreds of tourists and local residents, many dressed in white, climbed the towering Pyramid of the Sun in Mexico on Thursday to celebrate the Spring Equinox.

The pyramids are located in Teotihuacan, a sprawling pre-Hispanic ghost town 50 kilometres (30 miles) north of Mexico City. Teotihuacan translates to “a place where men become gods.”

People from across the country and abroad make an annual pilgrimage to the ruins to celebrate the first day of spring, climbing the tallest structure, the Pyramid of the Sun, and throwing their arms towards the sky.

The pilgrims believe the pyramids hold special energy during an equinox which can be passed to people, especially those who dress in white.

You’ll need to wait a while for this spring festival. Australia is on the other side of the world, which means their spring is during our autumn. But if you can hold on until September, you’ll be treated to one of the biggest spring celebrations. For 30 days, a whopping one million flowers fill Commonwealth Park in the capital city of Canberra. Along with sculptures, live music and a gnome-decorating competition, Floriade is one spring celebration you won’t want to miss!

In Japan, it isn’t spring until the national flower, the cherry blossom, starts to bloom. When cherry blossoms start appearing on trees, large crowds visit anywhere they can get a glimpse of these amazing flowers. The weather station even gets in on the action by giving regular “blossom updates” to help people plan their visits. Nice!

In springtime, friends and family give each other small woven red-and-white bracelets, sometimes with dolls attached. These bracelets are called martenitsi and are worn around wrists or on clothes. They are symbols of happiness and the colors represent the end of winter (white for snow) and the beginning of spring (red for sunny days). Bulgarians wear the martenitsi until they see a sign of spring, such as a stork or swallow. Some people place them on fruit trees instead hoping the tree will grow lots of yummy fruit.

Nothing says spring like throwing a doll in water. Wait, what? Well, this is a special doll, usually made of straw and dressed in colourful clothes. You’ll see Polish families and friends toting these dolls along as they march down to a pond or river (any body of water will do). This doll represents wintertime, so to send winter on its way and welcome spring, these dolls are sunk in water. Sometimes they’re even set on fire by adults beforehand. They really want to make sure winter stays away for another year!

previousWhere Have All The Presidents Heads Gone?  Long Time Passing!
nextI Would While Away the Hours Conversing With The Flowers And Talking To The Trees! Part One

When you drive in Virginia you will notice how green the state is and all the lovely flowering plans, flowers and trees the state has. Virginia is a colorful state to say the lease with...
Read more
February 20, 2020