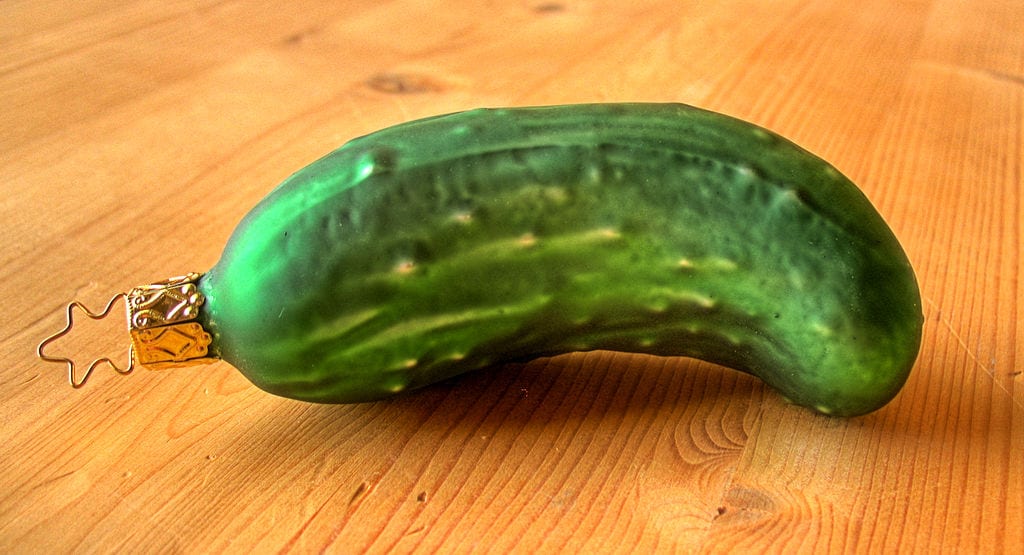 I have wanted to write about this Christmas tradition for a long time……what you may ask? The Christmas Pickle.  No I am not talking about eating a pickle during the holidays, this is a decoration that is placed on the Christmas tree.

I 1st heard about this tradition about 8 years ago.  This intrigued me very much.  So the twist I added was I would hide it ant say anything waiting for someone to find it and then I would have a surprised gift to the 1st person who found it!

Let me being by telling you a little back story of the infamous Pickle: Thank you Wikipedia for the following.

The Christmas pickle is a Christmas tradition for some Americans. A decoration in the shape of a pickle is hidden on a Christmas tree, with the finder receiving either a reward or good fortune for the following year. There are a number of different origin stories attributed to the tradition, including an origination in Germany. This theory has since been discounted, and it is now thought to be an American tradition created in the late 19th century.

In the tradition, an ornamental pickle is placed on a Christmas tree as one of the Christmas decorations. On Christmas morning, the first person to find the pickle on the tree would receive an extra present from Santa Claus or would be said to have a year of good fortune.

Berrien Springs, Michigan, was known as the Christmas pickle capital of the world. A pickle parade was held from 1992 until about 2003. The village is in the area of Michigan known for cucumber production.

This tradition is commonly believed by Americans to come from Germany and be referred to as a Weihnachtsgurke, but this is probably apocryphal. In fact, the tradition is completely unknown in Germany. It has been suggested that the origin of the Christmas pickle may have been developed for marketing purposes in the 1890s to coincide with the importation of glass Christmas tree decorations from Germany. Woolworths was the first company to import these types of decorations into the United States in 1890,and glass blown decorative vegetables were imported from France from 1892 onwards. Despite the evidence showing that the tradition did not originate in Germany, the concept of Christmas pickles has since been imported from the United States and they are now on sale in the country traditionally associated with it.

One suggested origin has been that the tradition came from Camp Sumter during the American Civil War. The Bavarian-born Private John C. Lower had enlisted in the 103rd Pennsylvania Infantry, but was captured in April 1864 and taken to the prison camp. As the story is told, on Christmas Eve he begged a guard for a pickle while starving. The guard provided the pickle, which Lower later credited for saving his life. After returning to his family, he began a tradition of hiding a pickle on their Christmas tree each year.

Another origin which comes from Berrien Springs is a Victorian era tale of St. Nicholas saving two Spanish children who were trapped in a barrel of pickles by an innkeeper.

No matter where ever this tradition began it is a fun twist to do during the holiday season.  Who could not help but like good fortune for the coming year or an extra present.  All I have to say is Happy Holidays and Season Greetings where ever you choose to hide your pickle!

previousIs There a Turkey on your Thanksgiving Table?
nextChristmas Stocking, Shoes left out or the Christmas Shoe Box, which one does your family do?