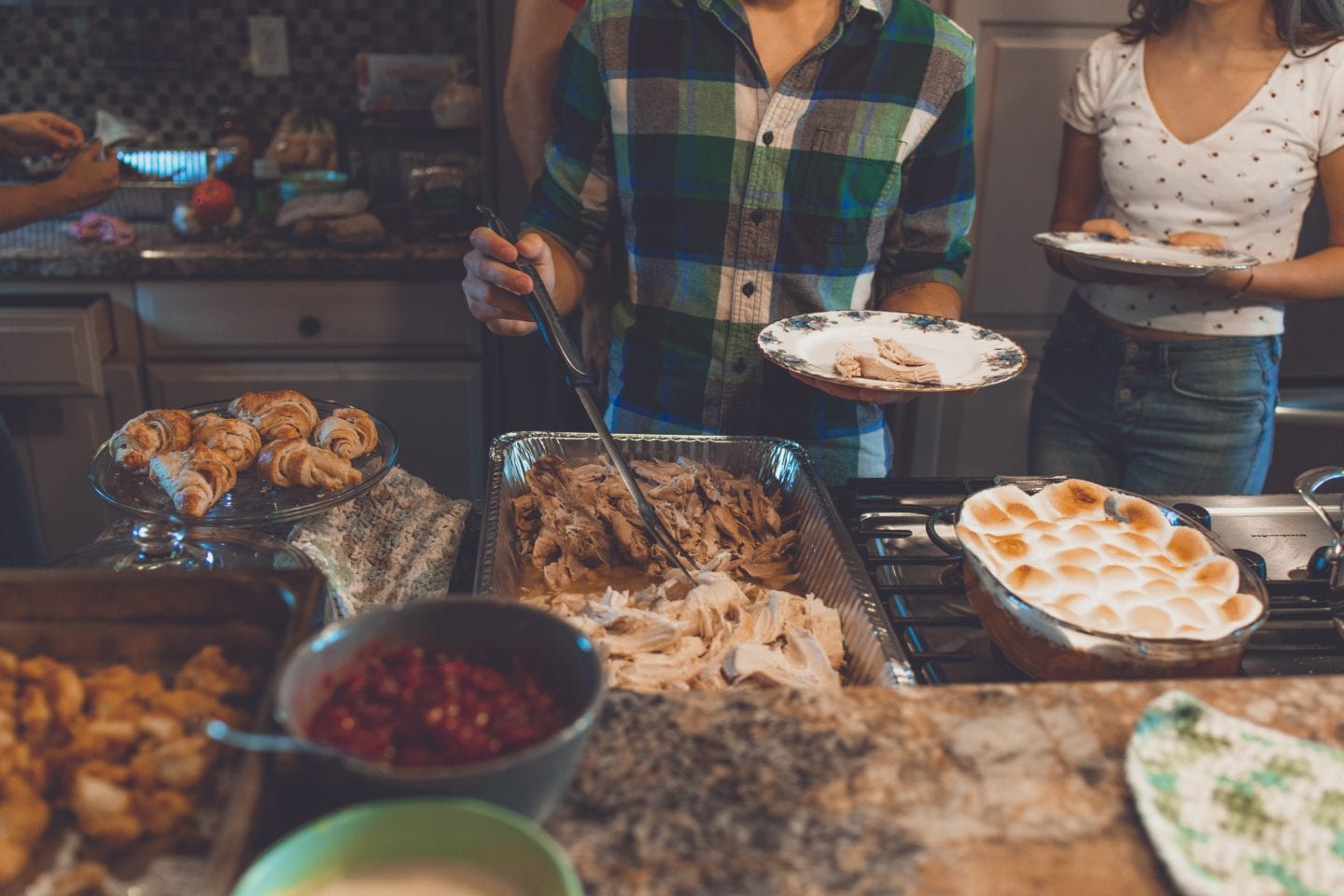 Every Thanksgiving for as long as I can remember and believe you me that goes back a long way.  My family has had turkey at Thanksgiving. I am talking about grandparents and parents.

Now me on the other hand I have been outside the proverbial turkey platter and I have had numerous main dishes appear on my table.   Roast beef, roast pork, lasagna, chicken n dumplings, pork chops, veal and lamb.  When I was single or my husband went to see his family and I had to stay at home numerous items would appear, bologna sandwiches, store bought roast chicken, deli sandwiches, bacon, eggs, grits, hot dogs and even one of my favs scrapple.  I was content with this fare.

But I regress let’s talk turkey.  Why turkey on the Thanksgiving table: According to my research here is what I found out.  You have just got to love the internet.

When Americans sit down with their families for Thanksgiving dinner, most of them will probably gorge themselves on the same traditional Thanksgiving menu, with turkey, cranberry sauce, stuffing, and pumpkin pie taking up the most real estate on the plates. How did these dishes become the national “what you eat on Thanksgiving” options, though??

It’s not necessarily because the pilgrims did it. Turkey may not have been on the menu at the 1621 celebration by the Pilgrims of Plymouth that is considered the first Thanksgiving (though some historians and fans of Virginia’s Berkeley Plantation might quibble with the “first” part). There were definitely wild turkeys in the Plymouth area, though, as colonist William Bradford noted in his book Of Plymouth Plantation.

However, the best existing account of the Pilgrims’ harvest feast comes from colonist Edward Winslow, the primary author of Mourt’s Relation: A Journal of the Pilgrims at Plymouth. Winslow’s first-hand account of the first Thanksgiving included no explicit mention of turkey. He does, however, mention the Pilgrims gathering wild fowl for the meal, although that could just as likely have meant ducks or geese.

It is often assumed that today’s Thanksgiving menu originated in an event commonly referred to as the “first Thanksgiving.” There is indeed evidence of a meal shared between Pilgrim settlers at Plymouth colony (in what is now Massachusetts) and local Wampanoag Indians in late 1621. But there is no indication that turkey was served. For meat, the Wampanoag brought deer, and the Pilgrims provided wild “fowl.” Strictly speaking, that “fowl” could have been turkeys, which were native to the area, but historians think it was probably ducks or geese.

When it comes to why we eat turkey on Thanksgiving today, it helps to know a bit about the history of the holiday. While the idea of giving thanks and celebrating the harvest was popular in certain parts of the country, it was by no means an annual national holiday until the 19th century. Presidents would occasionally declare a Thanksgiving Day celebration, but the holiday hadn’t completely caught on nationwide. Many of these early celebrations included turkey; Alexander Hamilton once remarked, “No citizen of the U.S. shall refrain from turkey on Thanksgiving Day.”

When Bradford’s journals were reprinted in 1856 after being lost for at least half a century, they found a receptive audience with advocates who wanted Thanksgiving turned into a national holiday. Since Bradford wrote of how the colonists had hunted wild turkeys during the autumn of 1621 and since turkey is a uniquely North American (and scrumptious) bird, it gained traction as the Thanksgiving meal of choice for Americans after Lincoln declared Thanksgiving a national holiday in 1863.

Moreover, there were pragmatic reasons for eating turkey rather than, say, chicken at a feast like Thanksgiving. The birds are large enough that they can feed a table full of hungry family members, and unlike chickens or cows, they don’t serve an additional purpose like laying eggs or making milk. Unlike pork, turkey wasn’t so common that it seemed like an unsuitable choice for a special occasion, either.

So I for one am glad we do not pass the deer, rabbit or squirrel around the table for this holiday fare.  So as you sit down to enjoy time with family, friends or even an alone time to unwind, Happy Thanksgiving!

The History of New Year’s Resolutions

The custom of making New Year’s resolutions has been around for thousands of years, but it started much differently than the modern tradition. Ancient Babylonia is where the New Year’s Resolution began. That was over...
Read more
December 17, 2019

The year of 2019 was quite a year for the U.S. housing market. Depending on where you live either in a rural, semi-rural or urban market……. Basically the Median home prices went all the...
Read more
December 17, 2019

To Move or Not To move?  Is that Your Question?

This is an age old question asked by many a home buyer or seller?  When is the best time to move or sell?  What should I look for?  Let me see if I can help...
Read more
December 13, 2019