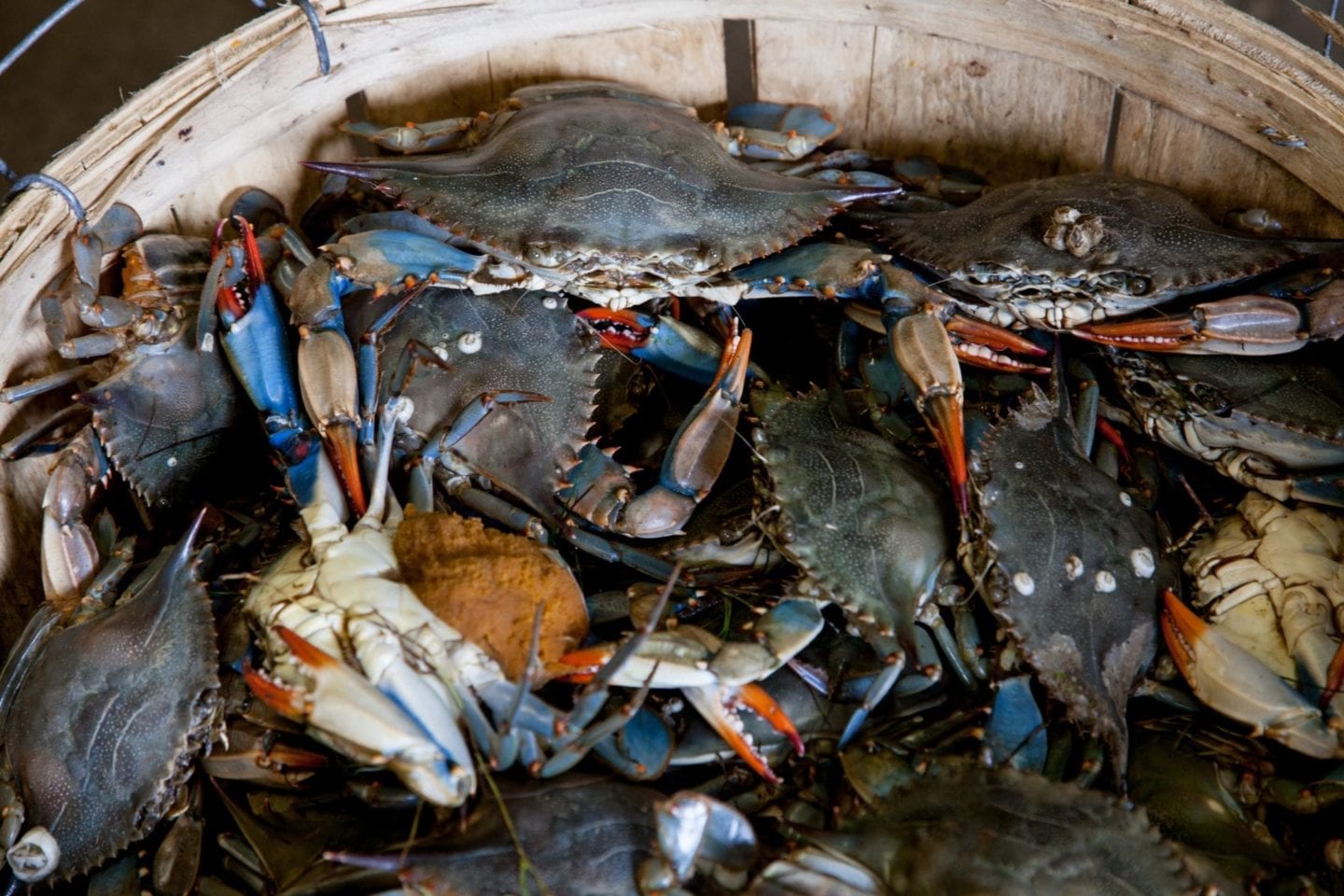 I am a Virginian. This being said I love Blue Crabs. Anyway I can get them. When Blue crabs shed their shell to grow a new one then you have soft shell crabs. Fried soft shell crabs (which by the way you eat the whole crab) is next to heaven. Coming in second is steamed blue crabs and crab cakes. Old Bay seasoning is the rule of thumb here.

There are nearly twice as many juvenile crabs in Chesapeake Bay waters as there were a year ago, according to an annual population survey.

Scientists in Maryland and Virginia found that in 2019, the bay’s crabs are at their most plentiful in seven years.

With a total of nearly 600 million crabs in the bay, the species is close to or above benchmarks that indicate a healthy and sustainable population.

The results suggest a strong crabbing season is ahead for Chesapeake watermen, with plentiful numbers of adults ready to be harvested as waters warm this month, and a booming crop of young that could grow large enough to be legally caught by the fall, or the 2020 crabbing season.

“The blue crab population is both healthy and thriving, which is great news for the entire Bay,” Natural Resources Secretary Jeannie Haddaway-Riccio said in a statement.

The blue crab population can be notoriously fickle, challenging efforts to balance conservation and commercial harvest. Weather and current patterns can significantly help or hinder the spawning of a new generation of crabs each year, and cold temperatures can kill many crabs during the winter.

It is clear the Bay’s blue crab population would be strengthened by improved water quality and crab habitat. Reducing the levels of nutrients reaching the Bay from farms and lawns and better managing stormwater runoff before it gets into rivers and streams, will help mitigate weather extremes, improve water quality, and contribute to the recovery of both blue crabs and Bay grasses.

It’s a tricky business, eating steamed crabs. You boil them alive, usually, or pay someone else to do it. Then you twist and yank the legs off, crack them open, rip apart the bottom shell, tear off the top one, break the bodies in half. You use your fingers and your teeth to coax out the meat, like the animals you descended from. You get spattered with aromatic crab juices and flecked with seasoning and bits of shell, and your fingertips are wrinkled by the end of the feast, from the aforementioned juices and from licking all the spicy Old Bay off in between bites of sweet crab meat. My husband can’t do it he says it is too much work, and I get it, how it could be off-putting, especially for someone who wasn’t exposed to them during childhood in is from West Virginia.

The reason, of course, is that blue crabs are delicious, and for me, it’s also because eating them is part of who I am. If I never ate them again, I believe I might whiter up. Luckily for me, I get them from mid-March till November, My mid-July birthday is a time I really crave the crab experience.

I sit at a paper-covered table with a dozen crabs and the requisite tools and towels, and maybe a beer or two (or a light, fizzy, refreshing cider, which seems so wrong, but tastes so right). There are no side dishes; there’s no time for side dishes, and no point, to my mind. The crabs are the prime objective, the drink’s just for washing them down (most folks preferred drink is a an ice cold beer). I also arm myself with kitchen shears now, to slit through thinner segments of shells—and create lots of tight, sharp edges that invariably pinch my fingers, like the crab is still fighting back from the other side, though I’ve already won (or so I think at the time, with a fresh bushel of steamed wonders)—and then I start in.

Eventually, though, even the greatest pleasure becomes stultifying, and so it is with crabs (for me, at least). It probably has something to do with the fact that these days I only eat them alone. They’re not meant to be consumed in isolation—they’re a communal food if there ever was one, and although they’re still good when enjoyed by one’s self, the milieu is not the same, and the milieu is important. The mini mountain of shells that piles up in front of a single feaster is a little forlorn, and it seems a bit anticlimactic to roll everything up in the sodden, ripped-in-places paper littered with shell fragments and transparent slivers of cartilage and stained brick-red with spices at the end of the meal. My fingers are tingling and prune-like and Old Bay is embedded deep under my nails, I’m full and hazily happy, and the scent of crab and seasonings will linger on my hands for at least the next several hours, but I’m still alone in being so marked.

The Art of Eating the Crab:

Remove the claws and legs. Throw away the small legs. …

Pull back the apron. Flip the cooked crab on its shell. …

Use your fingers or knife remove the gills on either side of the crab. …

Remove anything that does not look appetizing. …

Break the crab in half. …

Pick out the meat. …

Texas Pete, Lemon, Old Bay, Vinegar, Melted Butter are a few accompaniments that one may use if you like.

Dig in and Enjoy! I know I do!